Back again to the Grand Central Hotel in Glasgow to shoot two sample rooms.

Weird, walking along corridors stripped back to bare walls and floor boards, lit only by builders running lights and then into two finished sample guest rooms complete with tiled bathrooms. Despite major works still to be carried out in the building’s infrastructure these rooms give the company the ability to finalise looks, themes and fittings. 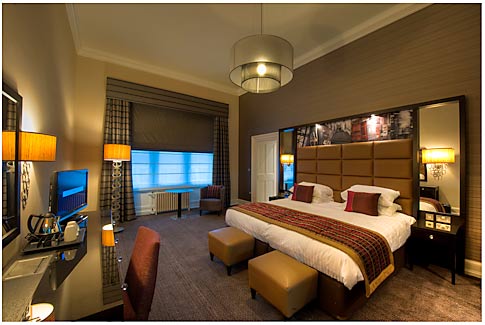 This image was a composite of 3 images taken at different speeds and combined in Photomatix Pro and then finished in Adobe Lightroom. It gives a much fuller tonal range including the light through the window.

The hotel had been so run down by the previous operators, Comfort Hotels, that the local authority refused permission to access the  lower floors that have in the past been service areas and kitchens. I understand that this was from a safety point of view as the place was over run by rats and rubbish. Probably something else too!